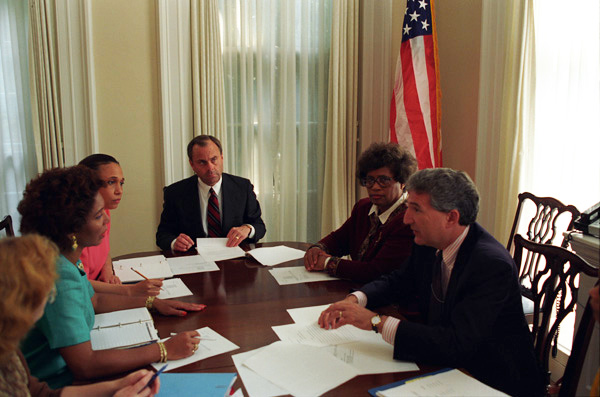 The Strange Death of Ron Miller

In the middle of October of 1997, Norman businessman Ron Miller was scheduled to testify before a congressional committee. According to several sources, Miller was prepared to implicate President Clinton's Chief of Staff Thomas F. McLarty III in Oklahoma-related scandals. First Lady Hillary Rodham Clinton was exposed to, at a minimum, severe embarrassment if Miller testified. (For more on this story, see the Spring 2001 issue of the Oklahoma Constitution, or consult our web site at www.oklahomaconstitution.com and read "Oklahoma Natural Gas Overcharges Tied to Clinton White House.")

Miller's sudden death on October 12, 1997, prevented his testimony against McLarty.

For several months, Miller was subjected to numerous threats over the phone, in person, and in other bizarre ways. He was specifically told to "back off." The 58-year-old Miller became ill Thursday, October 2. His condition worsened until he entered Norman Regional Hospital on October 4, suffering from "flu-like" symptoms. On October 8, alarmed at his rapidly deteriorating condition, business associate Larry Evans, a board member at Integris Baptist Hospital transferred Miller to Baptist Hospital in Oklahoma City at the family's request.

After his death, Baptist referred his case to the Oklahoma Medical Examiner's office. Despite extensive tests, the M.E.'s office declared Miller's death a "medical mystery." Some suggested Ricin poisoning as a possible cause, but the M.E.'s office specifically tested for that and found no Ricin antibodies. A hospital test for Legionnaire's Disease was also negative.

Others have proposed inhalational, or airborne Anthrax as the biological agent that killed Miller. Using medical records from Norman Regional Hospital, Integris Baptist Hospital and the autopsy report from the Medical Examiner's office, combined with material on inhalational anthrax obtained from the Center for Disease Control in Atlanta and other sources, the Oklahoma Constitution will examine this thesis.

Anthrax is a rare disease caused by spore-forming bacterium bacillus anthracis. Transmission through injured skin is more common than by inhalation. Inhalational anthrax symptoms follow deposition of spore-bearing particles into alveolar spaces of the human body. It is thought to occur most commonly from the inhalation of dust where animal hides or hairs are handled. The infection is expected to occur from one to six days after inhaling Bacillus anthracis spores, although some have suggested that an incubation time of up to forty days is possible.

Miller became ill Thursday, October 2, 1997, experiencing what he thought was a bad cold. His condition worsened into what he believed was the flu. He was experiencing high fever, persistent cough, memory loss, lethargy and chills. This is consistent with the early signs of airborne anthrax, but an accurate diagnosis at this stage, would require in the words of the literature, "a high degree of suspicion."

Norman medical personnel detected a right upper lobe pneumonia, and began him treating initially with timentin, a penicillin derivative. Doctors soon discontinued timentin in favor of more powerful antibiotics, azactam and kefzol. Neither of these antibiotics will cure a person of an anthrax infection. The drug of choice is penicillin in large doses (at least 1.2 million units daily, with erythromycin and doxycycline also considered efficacious by some authorities, to a lesser degree, if given early enough. Treatment with Penicillin G should continue for at least a week. Some experts believe inhaled anthrax can be fatal, despite antibiotic treatment even prior to symptoms.Cecil's Textbook of Medicine states that, "(T)he progressive course may be so rapid that anitmicrobial drugs may not save the patient's life."

Early in his hospital stay, Miller suffered from severe diarrhea, but doctors managed to bring that under control, and Miller even experienced general improvement over Sunday, Monday, and Tuesday.

By two o'clock Monday, October 6, Miller reported to the nurses that he "feels so much better," and appeared on his way to recovery. On Tuesday, Miller's temperature was normal, and his release from the hospital the next day likely. Then, on Wednesday, October 8, Miller's condition worsened dramatically, his temperature spiking to 105. The medical literature reports that, in many cases of inhalational anthrax, the patient often experiences a period of recovery, followed by rapid relapse, with increased difficulty in breathing, profuse sweating, cyanosis, shock and death in two to three days.

Norman Hospital then sent Miller to Integris Baptist, considered by many the finest hospital in Oklahoma. His condition worsened at Baptist. Doctors switched his antibiotics to rocephin and fortaz. Soon, fortaz was discontinued in favor of erythromycin. When a rash developed around the neck, upper chest, feet and ankles on October 10 (Friday) doctors added doxycycline to the regimen. There is some suggestion that Baptist doctors might have begun to consider something like anthrax by October 10, a Friday. Nurses reported that an unidentified "business partner" called and reported some travel in the last three to four months to Nebraska, Iowa, and California. The next comment was, "No specific exposure or activity that would suggest animal related illness." Then the records noted that a "coworker," also unidentified, "came by and reported Mr. Miller was in Iowa and Nebraska three to four months ago looking at horse ranches." Anthrax is usually associated with animal contact, with workers in animal hides occasional anthrax victims.

Then, Saturday, October 11, a "Doctor Frost" called a nurse. This mysterious "Doctor Frost" suggested that Miller was poisoned. No Doctor Frost is listed in the metropolitan Oklahoma City area and neither the hospital nor the family had ever heard of Doctor Frost. One consulting Norman doctor expressed some irritation that Miller had "great reticence in talking much about his personal life and one can only go ahead and deduce from the little hints about what is going on."

This cryptic comment suggests that Miller never told doctors at either Norman or Baptist that he feared deliberate infection with some deadly bacteria or other agent. He did, however, tell a business associate a few days before his sudden illness that after he testified before Congress, "Al Gore will never become president."

Medical literature consulted by the Oklahoma Constitution noted that sputum culture and gram stain are unlikely to be diagnostic. After five days, Miller's sputum grew only normal upper respiratory flora. Norman medical personnel noted Moderate gram cocci in clusters and moderate gram cocci in chains (suggesting the possibility of a staph-related infection), but the gram stain at Baptist reported no organisms. Viral cultures at Baptist were also negative. If proper antibiotic therapy is used to combat inhalational anthrax, "death occurs even if sterility of the bloodstream is achieved with antibiotics."

When referred from Baptist to the Oklahoma Chief Medical Examiner's office, Miller's death was classified as a death with "possible threat to public health." and "under suspicious circumstances." Agents of the Federal Bureau of Investigation (FBI) were in contact with the M.E.'s office during his autopsy. The initial M.E. report was "pending investigation." This was eventually changed to "natural," as opposed to the other possibilities of homicide, suicide, or unknown. Chief M.E. Fred Jordan reclassified the manner of death as "unknown," when challenged by Michigan investigator Stephen Dresch. Ray Blakeney of the M.E.'s office spoke to the Oklahoma Constitution on July 6, 2001 and again on July 19. Blakeney was very insistent that Miller did not die of any form of anthrax, assuring us that "toxicology testing" was done for inhaled anthrax. He added that part of the problem was that Miller "lived for several days." Blakeney reiterated that it was not anthrax, "unless it had taken a course that did not allow us to detect that."

Blakeney said that there are a few deaths each year that the technology is not advanced enough for a cause of death to be determined. "This happened to be one of those, and unfortunately in this case, happened to be some political thing . . . that everybody assumed that he was murdered." As we prepared to go to press, Blakeney promised that he would check to ensure that Miller's tissue specimens are on an "indefinite hold" with the medical examiner's office.

In the initial report of the medical examiner's office, Dr. John T. Cooper, who performed the autopsy, said, "(E)xtensive microbiological studies were negative; this does not rule out the involvement of an infectious agent." Dr. Cooper is now in private business in California. When contacted on July 11, 2001, he told us, "I don't know the cause." In regard to inhalational anthrax, Dr. Cooper said, "It's possible, but again I just don't remember the details of this case." He said that he did not recall why they ruled out inhaled anthrax, but admitted it was "possible," even if no anthrax is found in the tissues. His opinion is that Miller's death was "natural," but whatever killed Miller was "an unknown, an undetermined." The Pathological Diagnosis by the M.E.'s office cited a "clinical history of acute febrile illness with temperature greater than 104 degrees, leukocytosis and progressive eosinophilia (white blood cell count greater than 20,000 with pronounced left shift and eosinophils as high as 9%); diffuse alveolar damage of lungs with eosinophilia and clinical history of reactive airway disease; acute tubulointerstitial nephropathy, (a) clinical renal failure with creatinine as high as 5.1 and BUN/Creatinine ratios approximately 10, (b) renal tubal degeneration with marked cytoplasmic vacuolation, (c) focal interstitial inflammatory infiltrate with prominent eosinophilia; hepatic necrosis, centrilobular, with sparing of the immediate periportal parenchyma and moderate portal tract inflammation and superficial gastric candidiasis." The examiner summarized that "(T)he ultimate cause of death is believed to be either a rare infectious disease or a rare form of hypersensitivity to a biological agent. Unfortunately, the current state of medical knowledge does not permit us to solve this medical mystery."

The office of the District Attorney in Cleveland County considers Miller's death an open investigation. While the above consistencies of Miller's illness and inhalational anthrax are striking, we urge readers with other theories to contact the Oklahoma Constitution, or investigator Stephen Dresch at sdresch@forensic-intelligence.org.