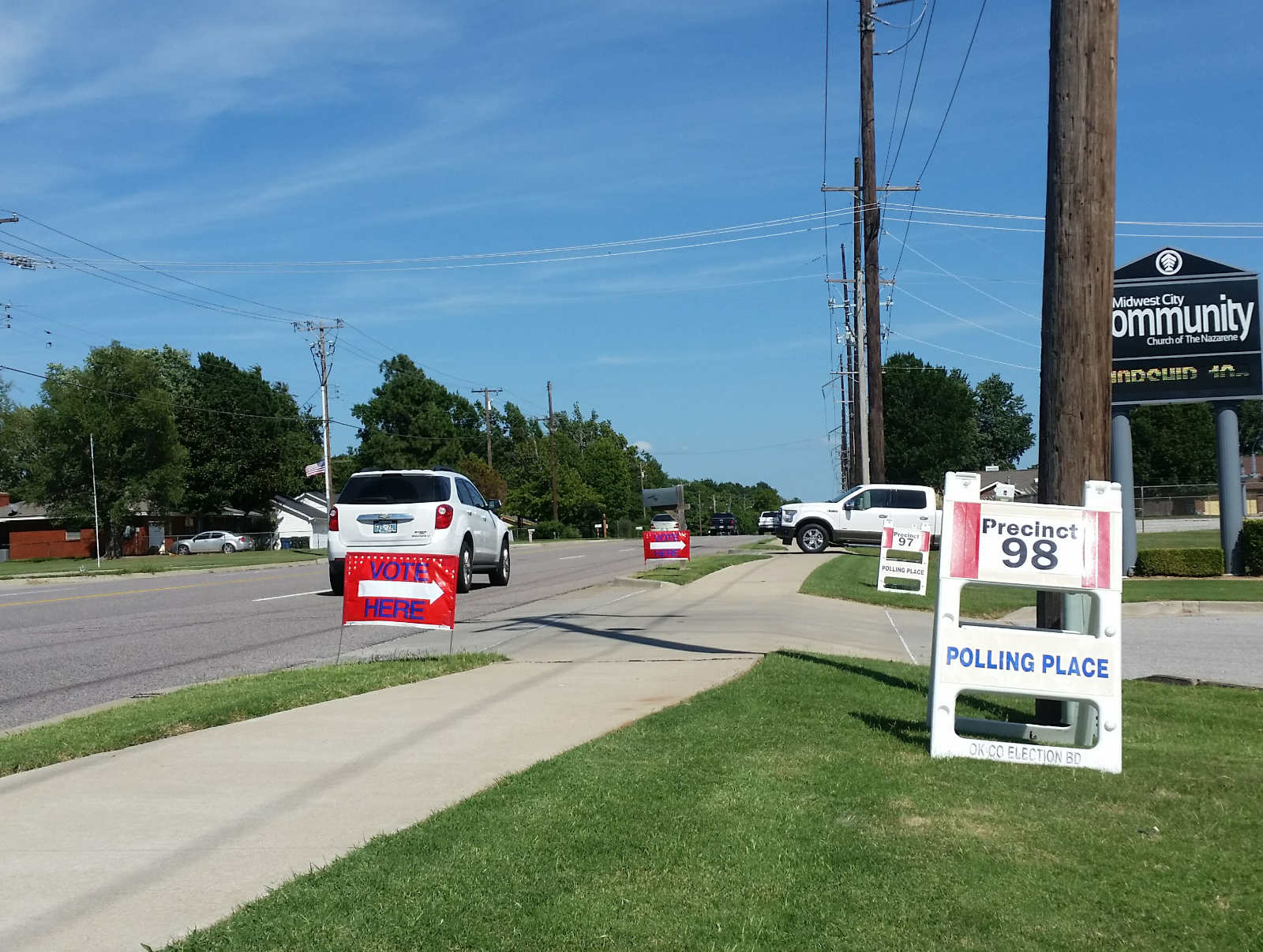 In August 1963 I was transferred to Tulsa from Wall Street, in New York, in a corporate headquarters relocation. A month later, on Tuesday evening, September 10, 1963, I attended my first political meeting—the monthly meeting of the Tulsa County Young Republicans.

The guest speaker that evening was Tulsa attorney Walter Hall, Ballot Security Officer for the Oklahoma Republican State Committee. In his speech Hall described in detail the widespread fraud practiced by Oklahoma Democrats in every election. And since Democrats controlled all county and state election boards, the governor's office, both houses of the legislature, the major law enforcement offices, and the courts, few Republicans were willing to challenge them.

Hall began by explaining that forty-four of Oklahoma's seventy-seven counties had not provided a secret ballot for voters since statehood in 1907, and that local Democrats regularly used every conceivable illegal device to intimidate voters and to fraudulently control the outcome of elections.

Although state law required that one of the three election officials in each precinct must be a member of the minority party, Democrats systematically recruited loyal party members to register as Republicans so that they could fill the minority positions.

He described how, on election day, after voters had signed the entry log, they were handed a paper ballot and a pencil. And since there were no facilities for marking a ballot in secret, they were obliged to place their ballots on the table and mark them with the three election officials looking on. If the election officials saw a voter mark his/her ballot for even a single Republican candidate, a number of things could happen—none of them good.

Hall explained that, in many Oklahoma counties, the welfare rolls were divided up by precincts and kept on the tables in the polling places. If an individual on public assistance was so unwise as to vote for a Republican, his/her name would be removed from the welfare rolls the instant the voter completed the ballot. In some Oklahoma counties the election officials were so brazen as to keep a trash can next to the ballot box, and any ballot with a Republican vote on it went directly into the trash can. The only ballots in the ballot boxes were straight Democratic tickets.

In other counties they were a bit more subtle and used a technique that Hall referred to as the "lead-under-the-thumbnail trick." That technique involved breaking the lead from a pencil and tucking it lengthwise under a thumbnail. When the election official took a completed ballot from a voter and the ballot contained a vote for a Republican candidate, the official merely scraped the lead across the face of the ballot, folded the ballot in the normal fashion, and placed it in the ballot box. When the ballot boxes were opened and the ballots were removed, state law required that all ballots with "extraneous markings" be classified as "mutilated ballots" and not counted in the final tally.

In other counties, election officials would allow a thumbnail to grow very long over a period of weeks or months preceding an election. On the day of the election they would file the thumbnail to a sharp point so that, when they took a ballot containing a Republican vote from a voter and prepared to fold it, they merely flicked the sharp nail through the edge of the paper. Ballots with small rips and tears were considered to be "mutilated" and were discarded along with those having extraneous markings.

When the speaker had concluded his remarks and the meeting was adjourned, I didn't hesitate. I walked directly to the front of the room and approached Mr. Hall. As we shook hands, I said, "I've just recently moved to Oklahoma from New York and I'd like to volunteer to form a committee to raise funds and to provide voting booths for all of those counties that don't have them."

Hall looked at me, chuckled, and said, "You don't really think they'll let you get away with that, do you? The Democrats throw us a bone now and then," he continued, "or we find them fighting amongst themselves and we manage to get somebody elected. We're a distinct minority in Oklahoma and I'm afraid we have to be satisfied with that." The people standing around the speaker nodded in agreement. "Yeah, that's right!" they chorused.

I was very disappointed. I thought they'd be angry. As the primary victims of the fraud, I thought they'd be mad enough to do something about it, but they weren't. They apparently proceeded from the assumption that if they tried, they were bound to fail—and, chances are, they would have. They had asked God for the patience to endure the things they could not change, for the will to change the things they could change, and for the wisdom to know the difference. Unfortunately, they'd put vote fraud in the category of "things they could not change."

In mid-February, just days after my election, I created an organization called Operation: Secret Ballot. I appointed five Tulsa County YRs as coordinators, two of whom were also active in the Tulsa Jaycees. We made no public announcements and there was no fanfare—we just did it. More importantly, we had a plan. We knew that very little could be accomplished if the effort was perceived as being a partisan effort. What was needed was a non-partisan front with bipartisan support.

Through the efforts of our two Jaycee coordinators, the Tulsa Jaycees were urged to invite Mr. Hall to be guest speaker at a future meeting. Hall spoke at the June 1966 meeting of the Tulsa Jaycees and the result was totally predictable. They were outraged at what he told them about vote fraud in Oklahoma. We had our non-partisan front.

A Jaycee leader was selected as overall project coordinator, and after a quiet conversation with one or two fair-minded, idealistic members of the Tulsa County Young Democrats—young Democrats who actually believed in honest elections and the rule of law—the project was launched. Operation: Secret Ballot was an organization of mostly Young Republicans, with Jaycee leadership and publicity, and just enough Young Democrats to validate our claim to bipartisanship.

Working with a cabinetmaker from the Jaycees, we designed a voting booth that could be made from simple one-by-two white pine frames, covered with unbleached muslin, and assembled with offset hinges to allow easy folding and stacking for storage.

The project coordinators did an excellent job of fundraising, raising more than $5,000 in less than a week—enough to purchase all of the materials we needed—and the Tulsa Rig and Reel Company loaned us an unused steel fabricating shop in West Tulsa for our assembly operation.

In late July, the project coordinators sent letters to county election boards in all of the forty-four counties where the secret ballot didn't exist, informing them that we'd have voting booths available for them, free of charge, by election day, November 8. All they had to do was to decide how many they needed. We would deliver them to their county courthouses during the first week of November.

When responses started coming in from county election boards, we found a mixed reaction. Some counties didn't respond at all, but among those who did there were both written and oral responses. For the most part, the letters received said, "Thank you! We've never been able to afford voting booths in our county." And they went on to say how many they needed and where to deliver them.

The oral responses were never direct or in writing, they were sent through third party word-of-mouth. Typically, they said, "If you come into our county with your damned voting booths you'll all go back to Tulsa in pine boxes!"

We had many threats on our lives during the life of Operation: Secret Ballot and, knowing of many instances of violence by Democrats, we took them all very seriously.

In mid-October 1966, Governor Henry Bellmon commented publicly on our election reform project, and within a day or two we were contacted by the Adjutant General of the Oklahoma National Guard. The General informed us that he would make National Guard troops and trucks available to us whenever we needed them. All we had to do was to tell him which counties were to receive voting booths and the number of voting booths to be delivered to each location.

During the first week of November 1966, the National Guard loaded and delivered from eight hundred to a thousand voting booths to counties across the state. Under the glare of public scrutiny, Democrats were afraid not to use them, and on Tuesday, November 8, Oklahoma voters went to the polls and elected a new governor, State Senator Dewey Bartlett, of Tulsa, the second Republican governor in Oklahoma history; they elected a Republican attorney general, Tulsa attorney G.T. Blankenship, the first Republican attorney general in state history; they elected Republicans in two of the state's six congressional districts; and they elected a Republican state labor commissioner.

We were very pleased that our friend, Dewey Bartlett, would be occupying the governor's chair for the next four years, but the most significant outcome of Operation: Secret Ballot was the election of a Republican attorney general. Having a Republican attorney general meant that the most powerful Democrat in the state went to prison for eight years, and that a number of State Supreme Court justices—who'd been taking bribes of from $15,000 to $25,000—were impeached and removed from the court. One or two others resigned rather than face the public humiliation of impeachment.

A small group of determined Tulsa County YRs gave the State of Oklahoma the biggest dose of political reform it ever had. The Tulsa Jaycees received the National Community Service Award from the U.S. Jaycees for their role in the project. However, in Republican circles, Operation: Secret Ballot was never mentioned. As the YRs would learn in the months and years to follow, it was typical of the recognition that the Republican Party showers on its most dedicated supporters.

Nevertheless, it is almost certain that Henry Bellmon's first term as governor (1963-67) and the Operation: Secret Ballot project of 1966 were, taken together, the two political developments that are the basis of the political renaissance that has made Oklahoma the reddest of red states. In 2014, although Democrats still maintained a slight edge in party registration, both U.S. senators, all five members of the U.S. House, the governor, lieutenant governor, and every other statewide office, as well as both houses of the state legislature, were in Republican hands. Oklahomans can be duly proud of the fact that theirs is the only state in the nation in which Barack Obama carried not a single county.

Paul R. Hollrah is a two-time member of the U.S. Electoral College, serving as chairman of Oklahoma's seven-member delegation in 2004. In 1975 he pioneered the corporate PAC movement, creating and registering the first corporate political action committee with the Federal Election Commission. In 1983 he was the principal founder the National Republican Legislative Campaign Committee, a fundraising arm of the Republican National Committee. A nationally-published blogger, he is retired and resides among the hills and lakes of northeastern Oklahoma.

Statewide and Congressional Races on the Ballot

Ron McWhirter on From the General Manager

Steve Byas on The Decline of the Oklahoman

Tim Bakamjian on Democrat Dystopia: How Progressives Plan to Ruin America . and Oklahoma

Shane Smith on Our COVID Obsession Will Destroy Liberty for Generations

Brandon Dutcher on Oklahomans Say Funding Should Follow the Student

Theodore King on The Federal Page for Fall 2020